In recent years, the market for plastic molding products has expanded hugely because it is effective in metal substitution, weight saving , and cost reduction.

For example, in the field of cellular phone and automobile nameplates, the usage of "Film Insert molding (FIM/IMD: Film Insert Molding / In-Mold Decoration)" combining screen-print on plastic for injection molding is attracting a lot of attention as a product differentiator within a maturing market.

We would like to focus in this paper on the process and functionality of Film Insert Molding (FIM/IMD) as part of our continuing analysis of FIM/IMD.

Film Insert Molding (FIM/IMD) is a labeling method which utilizes a printed plastic film or sheet which is inserted into a designated mold or die into which molten resin packaging material is introduced under pressure, and is then cooled to solidify it. In the process the printed sheet and the molded resin material are fused into a single integrated and printed substrate.

The 3 process stages of FIM/IMD

The FIM/IMD product consists of a printable substrate and printing ink, the molded resin as well as an adhesive or binder to enable substrate to adhere to resin.

The process of creation of FIM/IMD consists of the 3 processes described immediately below. 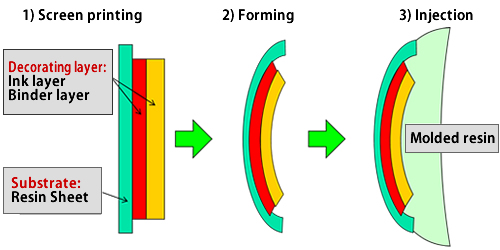 Example of 3 processes of FIM/IMD (Image) 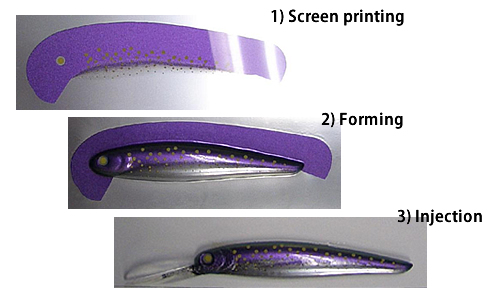 There are various unique benefits of FIM/IMD as described below, some of which apply to the print process itself.

1. Complete freedom of coloration is enabled for shapes for which direct coloring is problematic

FIM/IMD makes decoration possible even on molded objects whose shape renders it problematic to directly engineer or print an image on it.

In contrast to painting, multi-color, gradation tone and thin line decorative printing are enabled by FIM/IMD.

FIM/IMD confers the benefits of unparalleled image durability where the printed layer becomes through adhesion an integral part of both the molded resin and the print substrate, but between each and under the protection of each against abrasion and deterioration over time.

The screen print inks used in FIM/IMD are capable of a uniquely wide range of special functions.

An example is the IR transmittable function (To be explained in White Paper 2.)

In addition to benefits related to the printing as described above, there are also a number of benefits in manufacturing which derive from FIM/IMD such as weight saving through metal substitution, decrease in environmental footprint through metal plating substitution and cost reductions through efficiency in the overall process stages

In our next White Paper, we will go into more detail about ink functions within the FIM/IMD process.

So we hope you will enjoy our next White Paper, No. 2 in our FIM/IMD series.

Please also refer to detailed information about molding inks referred to in this White Paper as follows.